Though opossums aren’t aggressive in nature, they are opportunistic and resourceful creatures that eat what they can find, and take shelter where they see fit – even if it’s inside your home. That’s why opossum removal is so important! It is important to identify signs of opossum damage early, and start the process of removal quickly. While Opossums aren’t usually dangerous to humans, their feces can carry some pretty nasty diseases that can be dangerous to humans and pets. The preferred method for opossum removal in Brevard and Indian River Counties are by trapping them where they are known to enter the home.

Opossums have some pretty interesting traits. Did you know that opossums can be traced back to the dinosaurs ? Opossums have more teeth than any other mammal in North America, 50 to be exact. Due to an opossum’s low body temperature and successful immune system, it’s very rare for one to carry rabies.

When threatened, an opossum will hiss and show its teeth to try to ward off a predator. If this doesn’t stop the predator from attacking, the opossum will pretend to be dead, falling to his side, curling up and opening his mouth. Some refer to this as “playing possum”, and this defense mechanism often results in a predator walking away. 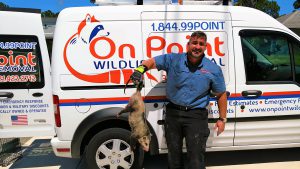